Listross pulled back on the reins. His horse whinnied and pulled to a stop. “I just needed a drink, please, Prince Listross, I was just about to get back out onto the field.” The ferronian’s blond hair was caked to his forehead with water he had dumped on it. He pressed himself against the well, slowly making his way to the opposite side. Listross hopped off his horse and undid the clasp that held his whip in place on the saddle. “Slaves can get water when they break for lunch. It looks like I’ll have to teach you how to work better and harder.” “No, please.” The man turned to run, but froze and screamed as the whip fell on his back. “One.” He tried to take another step away. “Two.” The man fell to his knees. Listross stepped closer for a better angle. As he slammed the whip down for a third strike, he felt small arms wrap around his leg. “Daddy, stop! You’re hurting him.”

Listross’s stern eyes flashed between Emmya and Eppra. “Fine.” He drew his weapon. “Come men, let’s go take this city. We’ll enslave the Ferronians as they’ve enslaved us.” Eppra let out the breath she was holding and gave Listross a small smile. “Thank you.” “Bolfreed, take Emmya to Tales, and make sure she stays there. The rest of you, grab a weapon. When we go in, we will make a point to not kill. If the Ferronians resist, bind them. Flouth, grab the rope.” “Got it, Prince.” “But Daddy!” Bolfreed hoisted Emmya as she reached towards Listross. Listross turned his back as Bolfreed started jogging off. “I love you, Emmya. Just stay with Tales. You’ll be fine” Grink strode over and pointed at Eppra. “Your family lords over this town, correct?” Eppra gave a single nod. “Then, Prince Listross, I suggest you select three others to march with you to take that house. It’ll be a sign of power. Have the rest of the men position themselves in the city.” “If you’re breaking into teams, I’d send one to the blacksmith, one to the innkeeper, and one to the Rigor Farm. They have the most renown in town, that is, besides my father.” “Grink, take the blacksmith. Flouth, the innkeeper. Rawruin, the farm.” “Yes, Prince,” the three men saluted in unison. Listross thrust his blade into the air before marching. Eppra led her horse by his side through the forest to the city. 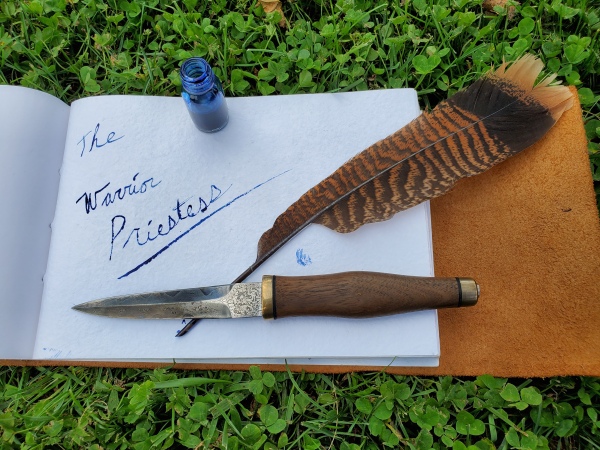 When readers read my novels, I want them to feel inspired to be more like Christ and fall more in love with Him. That's because, to me, novels are two things. First, an escape from the lives we are currently living, and secondly inspiration to live these difficult lives better than we currently are. They give hope that with Christ, if we continue to endure, to persevere, there is a light at the end of the tunnel. This life is difficult, yet. I know that well, but I also know that we have power in Christ to change maybe not what's going on in the exterior, but our attitude. If one person decides to be cheerful, even in the most darkest of circumstances, it can shine a light brighter than even we realize. Also, sometimes it's nice to be able to worry about something that doesn't matter. To kick our feet up and get lost in the pages of adventure.

Listross turned back to her, brow furrowed deep. “You really want to help?” Eppra nodded, meeting Listross’s eyes with boldness. “Then this is what I want from you.” Listross sheathed his weapon. “Go. Take your horse and ride back to those men. Tell them there’s nothing this way and convince them to ride back into the city. After the moon has risen and candles are blown out, take the weapons your village has and bring them here. Bolfreed will be trailing you, and if you stray, his arrow won’t.” Eppra slowly nodded. “It will be done.” “Let her go, Thyrin.” Thyrin gave Listross a concerned look, but let her go. Immediately, Eppra took her horse’s reins and skillfully mounted. Thyrin watched her and whispered to Listross. “Are you actually going to trust her?” Listross glanced at Thyrin, and held up his finger. Eppra looked back at the group. “Everything will be done as you asked, but I ask that you look favorably on me and my town.”

“I know it will be difficult to keep the children quiet, but we must.” Listross looked over his following, scanning the crowd. “Thankfully there are plenty of trees in the area to hide us, but we are only about three hours from the village. We will attack at night. By this time tomorrow, I hope to see everyone settling down in homes by fireplaces just as you all deserve.” Flouth, who stood at the back of the group, applauded softly and the rest followed. “Let’s try to avoid a fire tonight and eat our meal cold. We don’t want the smoke drawing unwanted attention.” “Yes, Prince,” Wanetha stood and started emptying various food items from the cart, commanding some of the other women to chop and slice. “Those of you needing to learn to read and write, please meet over there, and I’ll be with you in a moment.” Thyrin and the majority of the slaves that were new chattered excitedly amongst themselves. Listross smiled and waved as they passed by.

Grink and Listross sat at a small table that they acquired from their latest endeavor. They had managed to free a group of Tavalaskians on an onion farm. Thyrin and the men from his vineyard joined in the fray against the Ferronians and fought well. Unfortunately, instead of celebrating the victory, Listross had to have Flouth consol those from the vineyard. Killing those who were evil was not evil, but bringing justice. To Listross’s surprise, Thyrin didn’t take the battle as difficult as the rest of his men and was taking inventory of the new supplies. “This last battle was easy because we surprised the Ferronians and highly outnumbered them.” Grink sipped a cup of tea. “But you see, the more farms we attack, the more farms we free, the more upset we make Yurn, King of the Ferronians. We should soon expect more soldiers to be out searching for us and for the plantations to be more heavily armored.”

Not to shabby today. Even with the wedding, I managed to write about 300 words. I started working on Chapter 6 for Prince of Slaves! It's turning into something a bit different than I had originally thought, but I still like it. Originally, I had planned to write shorter scenes for Prince of Slaves and... END_OF_DOCUMENT_TOKEN_TO_BE_REPLACED

I'm starting this Day 8 review with talking about Day 7. Yesterday, I took a writing Sabath we'll say. It wasn't intentional, I was just super busy. Unfortunately, Day 8 hasn't been much better. I did write 200 words, though. And tomorrow I have a wedding to do to. Exciting, but not helpful when it... END_OF_DOCUMENT_TOKEN_TO_BE_REPLACED

For those of you who don't know, NaNoWriMo stands for National Novel Writer's Month. A bunch of writers attempt to crank out 50,000 words in the month of November. If you want to know more, click here to go to their website and possibly sign up.